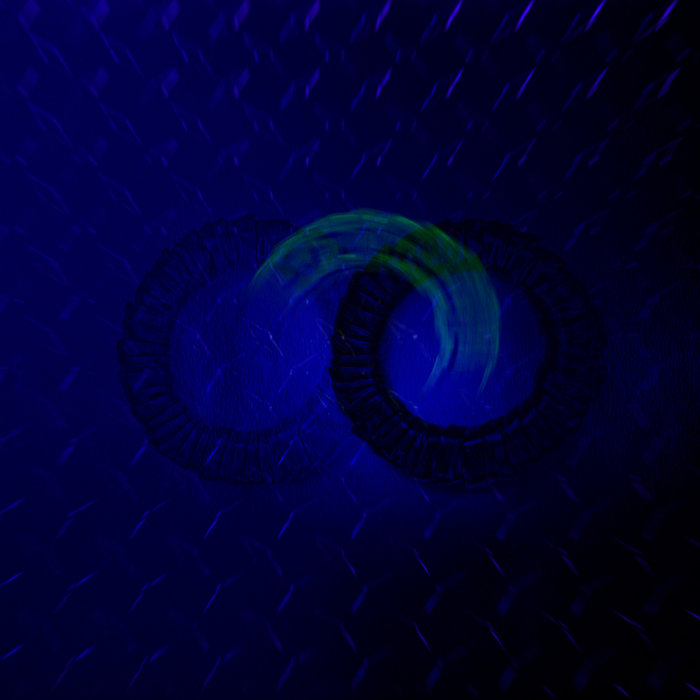 "Music for driverless dream cars on their self-driven way to the junkyard."

"The Chicago duo Coppice came into prominence using tools such as modified reed organs, transducer-based filters, and repurposed cassette decks, creating a body of work with them offered a disquieting and intimate listening experience. Now, it seems, Coppice’s Noé Cuéllar and Joseph Kramer have turned this methodology on its head–instead emphasizing modular and physical-modeling-synthesis. Rather than manipulating acoustical reality, they’re creating fictionalized accounts of it.

Entering the crowded arena of abstract electronic music might have seemed like a bold choice after building such an idiosyncratic soundworld, but Green Flame is full of all the engrossing nuance and personality that animated Coppice’s previous recordings. One of its more striking features is the strange and potent sense of locus. The locations illustrated therein may not always be fully identifiable by the listener, but there’s always an ineffable somewhereness. It serves as an agent of cohesion over the vast and varied album–and the track titles (“Here,” “Cul-de-sacs”) confirm this.

All the activity of “Ground,” the opening and longest piece at twenty-two minutes, transpires over and within a sustained drone. Initially, the discourse appears completely abstract, but as the track progresses, you start to wonder if your’e apprehending real-world sounds entering the sonic image–particularly vehicular traffic. “Is This The Spot?” broaches similar questions, as real or synthesized bird song and human voice sit in the periphery while dark hued shuffling brushes up against your ears.

There’s a dimensionality to this music that takes volume out of the equation altogether. Instead, the various layers of activity seem positioned geographically–in certain cases there’s even a sense that a given sound is obstructing the view, concealing another texture. Even the most synthetic sounds feel connected to physics. The most traditionally musical aspects that intermittently emerge–such as the pads that creep into the beginning of “Cul-de-sacs”–also seem to navigate space, rather than simply occupying a region of the mix.

Green Flame’s tagline “Music for driverless dream cars on their self-driven way to the junkyard” hints at the disc’s particular tenor. It’s quietly dystopian, covertly cinematic, with a touch of dry humor and a machine-like melancholy.”–Nick Storring, Musicworks Magazine {2018}

"The ocean wave and/or windy effects that start off Ground are static and pressurized, like a fine mist drone or tuning into radio frequencies, or both. The track runs a generous twenty-two minutes and aside from the oceanic feel, taps into invisible circuitry that is minimal and slightly menacing. Their sources are not instantly apparent, however they offer a detailed website that delves into details. As the piece moves the initial sizzle washes away into sporadic micro tonalities and small buzzing electronics. It has the effect of listening to gradations of weather patterns, in particular incoming coastal storms with heavy winds. There’s a fair balance between the hazy gray background and occasional effect.

The rumble of a passing vehicle or aircraft makes its presence heard. Tracks 2-8 are shorter vignettes with amplified movements, chirping birds, anonymous vocal chortle, animated buzz, and surprising blend of field recordings and a scope of electronic bells and gizmos. Country Road sounds anything but easing on down the road – it’s wildly interesting in its subtle complexities. The closest thing I can compare this to may be, say, Kapotte Muziek, and even that is a stretch. There’s a lot going on for a record that depends on its own breadth and intervals. Save for the slightly noisier Here which defines the meaning of gray area in its atonal approach and performative flourishes.

It’s playful gaseous-ness disengages the listener somewhat compared to the other works here, it’s more like listening to fireworks deploying randomly than any form of harmonics. Cul-de-sacs and Ashdown (Slimy) follow it with more intimate declarations that play on the downward spiral of the previous actions. But on the latter there’s a horn-like organ flair that sound like a woozy royal entrance. It’s suggestive with a literal bent, and barely audible in the final minutes. There are two short tracks titled Is This The Spot? appearing here (track 2 and 8) which sound to be snippets from lengthier pieces that dispense anticipation. There is an emedded, underlying sense of humor here throughout, it’s as subtle as all of their experiments on this, and other recordings.

Finally, on the eighteen minute finale, Emanations, the atmosphere is as if we are outside in a dark wilderness area, one of those places where there isn’t so much ambient light from nearby cities. A sixth sense gradually kicks in and you have to otherwise sense things by proximity, but the broadest scope of spatial relationships. The narrowly audible tone flickers nominally, recalling some of the experimental work of Richard Chartier. This is headphone-centric work, you’ll be able to hear a pindrop." –TJ Norris, Toneshift {2018}

"Caduc describes this as "Music for driverless dream cars on their self-driven way to the junkyard", and listening to the twenty-two minute opening piece 'Ground' I get what they mean by that. It's a beautifully vague piece of music, meandering about. No idea what went into the equation here (sounds like cars on a wet street), but it sounds mysterious and intense. The other pieces are shorter and more along the lines of the earlier work of Coppice, being transformations of sound sources that are no longer recognizable, but perhaps this time mixed with some more modular synthesizer, or maybe adding transformations using those modulars. I am not entirely sure there, and perhaps it is also not really of importance. As always it is the musical result that counts and Coppice doesn't let us down. They once again know how to combine musique concrete influenced techniques, obscure sound sources and improvisation into some excellent pieces that is drone heavy but not limited to drone music. That opening piece is already worth getting this CD for, but also the eight other pieces are great, and altogether this is seventy minutes of fine sonic bliss." –Frans de Waard, Vital Weekly {2018}