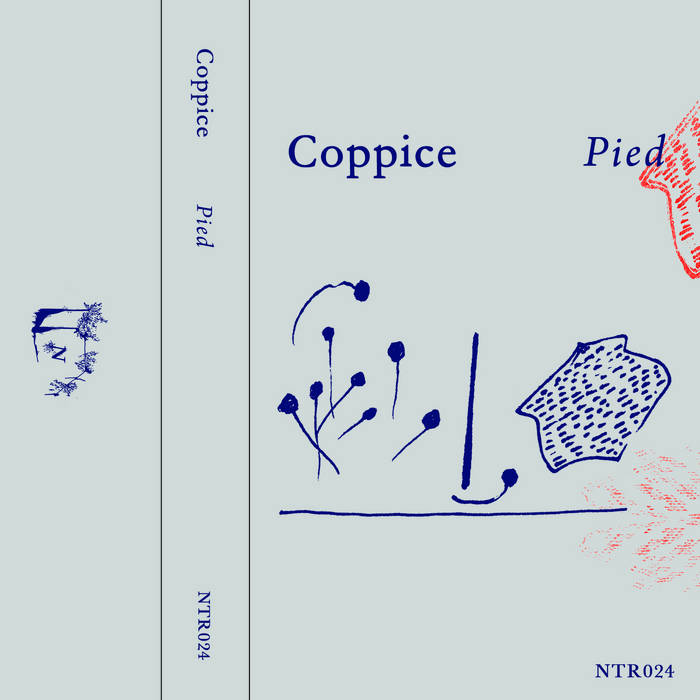 Composed and recorded by Noé Cuéllar & Joseph Kramer in Chicago between 2011–2012 for pump organ and tape processors.

"Since late 2009 we have developed compositions using a modified boombox – a tape loop machine that records and plays back simultaneously. Sounds that enter it are released within seconds, sounding gentle feedback. Our first compositions using this boombox and a shruti box marked the beginnings of our collaboration as Coppice, and a phase of up-close entwinement of both instruments in decidedly quiet gestures. Since then, we have expanded our dynamic palette and range of instrumentation to include more bellowed instruments, custom instruments and other electronic processes.

Last Fall we began imagining what has become Pied, a composition for tape, pump organ and the boombox. Its form contrasts the tapes’ fibrous processing with the more tabular appearances of microtonal pump organ transpositions – performed quietly but loudly amplified to bring out interferences and resonances by means of the original microphone techniques.

On one hand, Pied is a stark display of our sounds as solo artists, but in a borderline duet: five pump organ sections (recorded in Summer 2011 at Fljótstunga, Iceland) alternating with their boombox mediation and trails.

On the other hand, developing this piece at High Concept Laboratories has been a careful and entangled collaborative process, working directly with tape, scoring multiple generations of processing, and using a variety of acoustic resonators for coloration.

Although our compositional ideas may be fixed, the boombox’s response to these ideas is inherently oracular. Sections of Pied switch between several takes of the same content on tape, each sounding completely different from the other. We decided to keep many sonic incidentals and utterances across the many coats of the boombox’s reflections, also as a way to reveal the audible transparencies in the tape that didn’t erase. Towards the end of the piece, a snippet of our piece Seam seeps through the layers (what may perhaps be a recording from a performance in November of last year).

It is in this dendritic way that our work continues to develop, with fractions of past works refracted, and with certain sonic aspects highlighted at the expense of others." –Coppice, February 2012

"Just saw this Chicago based duo play a spectacular live show […] These guys combine cracked electronics with harmonium (or pump organ, or some damn thing) into brilliant extended pieces of generally quiet, slowly unspooling sounds. It seems as though their approach would result in a series of discrete musical events, but they manage to give their compositions a narrative cohesion that transcends a lot of similar work." –Byron Coley, The Wire – Issue 363 {2014}